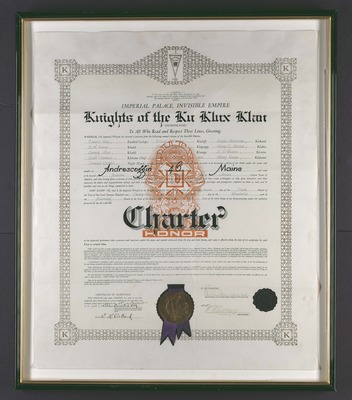 The author of this physical charter is unknown, but it was most likely drafted by the imperial wizard or his assistants. The charter was signed on October 24, 1925 but the actual production date is also unknown. The charter seems to be a basic outline that was given to chapters of the KKK, to fill out at their discretion. The purpose of the charter, is to introduce this chapter, of Auburn, Maine into the "Invisible Empire”, and to verify their right to operate under the conditions of the “Imperial Palace.” Throughout history, it has been a requirement of small-town chapters of the KKK, to hold such meetings, in which they sign their names and swear to serve the imperial Wizard. During this time, droves of men were flocking to join the KKK in any way they could.

This charter is encased in a glass frame. The charter was printed on cream-colored paper, and filled in with bold black ink. The title “Knights of the Ku Klux Klan” is darkly bolded and expressed with very ornate script. The text has blanks where the men would fill in their names and the contextual information that would align with the Auburn chapter KKK. In the middle of the paper, there is an orange stamp that is superimposed over the text depicting two men, ornamented in KKK garb, atop horseback. Within the stamp, are the words “Without Fear and Without Reproach” which was a common phrase used by the KKK on medallions and coins in the era. The charter is signed and validated by the Imperial Wizard, Exalted Cyclops, and a witness.

The ‘second coming’ of the Ku Klux Klan is a hate group that began in Atlanta, Georgia in October 1915. It existed in Maine from 1920 to 1931. It pandered to ‘plain people’, ‘hicks’, and ‘small-town dwellers’, hoping to recruit others into their cause, and be assured of local support.

The group retained its white-supremacy beliefs, but also became anti-Catholic, attacking what was, at the time, another minority. They were also anti-semitic, and generally against foreigners, or ‘aliens’.

The KKK was founded in Pulaski, Tennessee by a group of confederate veterans. They met as a social get together and ‘accidentally discovered that their strange uniforms ‘had a great influence over the lawless but superstitious blacks.’’ They titled themselves the ‘Invisible Empire of the South’. During this early period is when the violence against African Americans really began. During the time that black people were finally gaining positions of power in politics, the KKK made it their mission to hurt any republican, black or white, leaders or voters, just to make sure their views remained dominant.