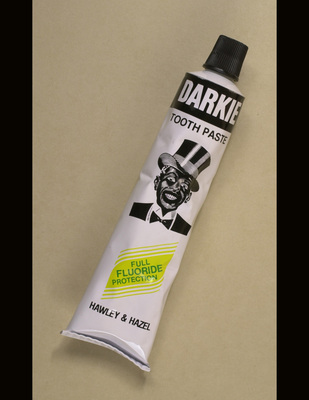 The packaging consists of a wide-eyed smiling, black man wearing a top hat and a tuxedo. There is a big contrast between the darkness of his lips and his teeth. On the top of the front side of the package it reads ‘Darkie tooth paste’, then the image of the black man. In green with yellow background it reads ‘full fluoride protection’.. On the side of the package it says ‘Darkie’ in big white letters, and underneath it ‘cleaner teeth, cooler taste’. The tube is full of toothpaste, doesn't seemed to have been used, and looks very similar to the package.

Darkie toothpaste, was established in 1933, in Shanghai. It was a brand of toothpaste made by Hawley & Hazel Chemical Company. This company was bought by Colgate, in 1985, and is no longer made by Colgate. In 1990, the name was changed in English from Darkie to Darlie, and a vague image of a man. Colgate's chief executive stated, “It's just offensive. The morally right thing dictated that we must change. What we have to do is find a way to change that is least damaging to the economic interests of our partners''. ( McGill). But the Chinese name was never changed, and continues to be Black person toothpaste. “Darkie” is a term used in the United Kingdom and the United States to refer to black people. This brand of toothpaste paraded a goofy looking Al Jolson figure. Jolson was a very popular entertainer in the early 20th century. He gained much of his fame through mocking black people for the pleasure of white people. In the United States Darlie gained notoriety once again, in 2004, where it was displayed in the Mockumentary “Confederate States of America”.

"How Racist Is Your Toothpaste?" Darlie Toothpaste and Its Racist Roots | The World of Chinese. N.p., n.d. Web.