E-e-e-yah-yip Go over with U.S. Marines 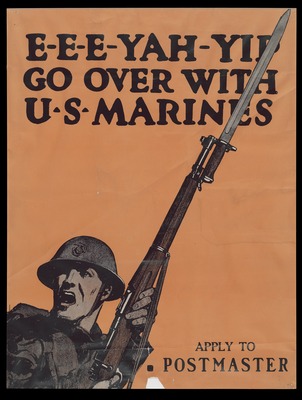 "E-E-E-YAH-YIP. GO OVER WITH U.S. MARINES. APPLY TO POSTMASTER".

E-E-E-YAH-YIP Go Over with the U.S. Marines

Created in 1917, this poster by Charles Buckles (C.B.) Falls is a classic “call to arms” designed to rally Americans to enlist and fight in the Great War. The poster features a young Marine raising his rifle and bayonet with his mouth open seemingly yelling the battle cry “E-E-E-Yah-Yip,” taught to the U.S. Marines at this time during their training for war. “Apply to postmaster” is the only other phrase on the poster, as this was a common way for recruits to enlist in 1917. The small black box that appears next to this phrase is the signature of Falls, who became such a popular artist of recruitment posters that he was able to drop it from future works, which is possibly why it is filled in solid black on this poster. Falls, who was quoted as saying, “A poster should be to the eye as a shout is to the ear,” displays that sentiment on this poster as he utilized bright colors and minimal imagery and text to draw a strong response from the eventual 9,000 officers and enlisted men who would serve overseas for the Marines in the war effort.

While the U.S. Marines at this time had a sizeable force of Non-Commissioned Officers and officers with battle experience, they were the smallest branch of the Armed forces when the United States entered World War I. Thus, the Marine Corps had to recruit heavily as they did not yet have the reputation they enjoy today. The Marines gained a great deal of recognition in 1918, at the Battle of Belleau Wood, when they earned their famous nickname “Teufelhunden” (German for “Devil Dog”). All of the Marine Corps recruiting posters from this era, especially the ones that Falls created, work together to invoke a sense that if one wanted to go and fight, they should do it with the toughest, the best, the ones who lead—the U.S. Marines, a message still used by this branch of the armed forces to this day.

WWI, World War I, US Marines