Civilians, when we go through this we need all the help and comfort you can give - The Jewish Welfare Board 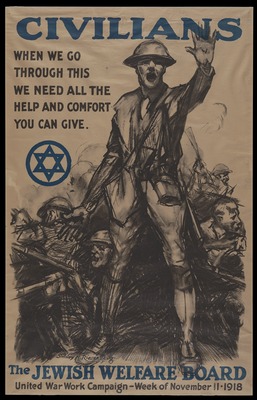 "Civilians, when we go through this we need all the help and comfort you can give - The Jewish Welfare Board"

Civilians: When We Go Through This We Need All the Help and Comfort You Can Give

During the week of November 11th to 18th, 1918, the United War Work Campaign took on a project to raise $170,500,000 in subscriptions and pledges in an effort to boost the morale of the American troops fighting in the Great War, as well as provide recreational activities for them while they served overseas. The United War Work Campaign was comprised of a joint effort by seven different voluntary organizations during World War I. Among these was the Jewish Welfare Board (JWB), formed on April 9, 1917 in order to support Jewish soldiers during the war, as well as the larger effort to help the American military forces in their entirety. The JWB recruited and trained rabbis for military service, provided support materials for newly commissioned chaplains, and oversaw Jewish religious facilities at military installations.

This poster was created by Sidney Reisenberg, an illustrator from Yonkers, New York, who was well known for producing posters for the United States Marine Corps and the Liberty Bonds programs. The illustration appears to be sketched with charcoal. The images presented are all in black with the exception of word “Civilians,” the Star of David symbol, and “The Jewish Welfare Board.” These particular words are blue. Within the Jewish faith blue is a significant color; it represents divinity and equilibrium. At the very center of the poster is a soldier holding up his hand in a gesture saying halt, most likely to attract the attention of the viewer. Behind this soldier are figures, faces, and weapons emerging from within a trench. These images are not very clear, but the grim scene is symbolic of the chaos of trench warfare occurring overseas. The phrase, “When We Go Through This We Need All The Help and Comfort You Can Give” is offset to the left. This is a direct appeal to the civilians on the home front who were viewing this poster to help in any way possible, especially by pledging or donating money.