The Country Needs You To Help Harvest The Corn

US Department of Agriculture 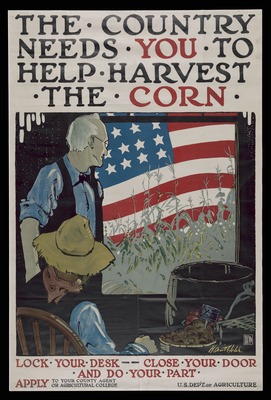 "THE COUNTRY NEEDS YOU TO HELP HARVEST THE CORN. LOCK YOUR DESK. CLOSE YOUR DOOR. AND DO YOUR PART. APPLY TO YOUR COUNTY AGENT OR AGRICULTURAL COLLEGE. US DEPT. OF AGRICULTURE."

The Country Needs You to Help Harvest the Corn

Created by H. Devitt Welsh and produced by the U.S. Department of Agriculture, this poster brought the war effort home to the American farmers. Corn was promoted as an alternative food during the war years, ensuring that wheat harvests could be conserved and shipped overseas to the soldiers and the European relief efforts. Corn’s nutritional value was promoted and foods like popcorn became more popular. Corn harvest yields were bountiful and corn could be harvested often. The labor of the harvest could be difficult without a complete labor force. Volunteer organizations like the Women’s Land Army (1918) were formed during the war to assist with harvests. Programs under the Food and Drug Administration encouraged Americans to plant gardens, raise animals, conserve food, waste less, and ‘do their part’ to aid in the war efforts.

In this poster, the artist initially draws the viewer in with the juxtaposition of the waving flag against the cornfield, framed squarely in a farmhouse window. Within the farmhouse, an older man stands next to a seated farmer as they look out over the field. The farmer’s face isn’t shown and he almost looks like a scarecrow. The faceless farmer may represent the enlisted men, whose farms were left in the hands of their families and neighbors. An empty barrel sits in the corner implying lean times, however, the crop is plentiful and there are potatoes and apples on the table. The message “Lock your desk, Close your door, and Do your part,” written across the bottom, appealed to citizens on the home front to assist with the harvest. The war effort, and their men abroad, were depending on them to fill the proverbial barrel.

WWI, World War I, US Department of Agriculture