The Hun - His mark - Blot it out with Liberty Bonds 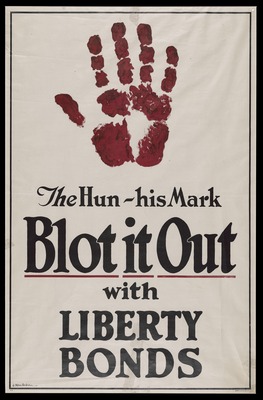 "The Hun - His Mark - Blot it Out with LIBERTY BONDS"

The Hun, His Mark—Blot it Out with Liberty Bonds

The Committee of Public Information commissioned “The Hun, His Mark,” in 1917. This striking poster was designed by Chicago artist James Allen St. John who was best known, during the early part of the twentieth century, as a fantasy illustrator who worked closely with the Tarzan author Edgar Rice Burroughs to make his novels come to life for readers. In this poster, St. John depicts the bloody handprint that symbolized the attack of the German soldier, or “Hun” (a derogatory term). As the poster states, people were told by buy liberty bonds as a way to directly counteract the German threat that could possibly sweep the United States if not contained. This poster signified a shift toward a more gruesome and personal approach to get people to buy the bonds that funded the American war effort. Fear was used as a tool so that people would have something to think about while their husbands and sons were fighting in Europe. The rampant xenophobia and anti-German immigrant sentiment within the United States at the time also caused many German-Americans to feel compelled to contribute to such campaigns as a way to prove their loyalty.