For every fighter a woman worker Y.W.C.A. : Back our second line of defense 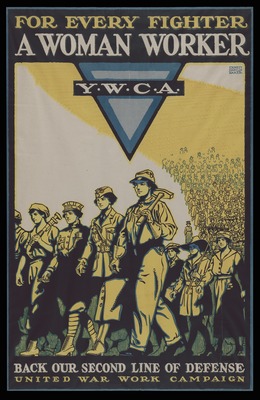 "FOR EVERY FIGHTER A WOMAN WORKER. YWCA. BACK OUR SECOND LINE OF DEFENSE. UNITED WAR WORK CAMPAIGN."

For Every Fighter, A Woman Worker

Wartime posters in this era tended to have four main goals: to sell liberty bonds, to drum up patriotism and support for the war, to fund the Red Cross, and to support troops overseas. Ernest Baker’s poster, For Every Fighter, A Woman Worker, draws on the new role women played during World War I. The United States experienced a shift in gender roles and expectations during the war; the reliance on domestic industry to aid in the war efforts overseas brought many women out of the house and in to the workforce as they were needed to fill the jobs vacated by soldiers overseas. While women’s efforts to support the first global war are often overlooked, Baker’s poster sheds light on some of the ways in which women were recognized for doing their patriotic duty in 1918. In the poster, a literal army of women workers, some wearing military uniforms and some carrying tools and farm implements, march under the banner of the Y.W.C.A.

This poster was commissioned by the Young Women’s Christian Association (Y.W.C.A.), as part of the United War Work fundraising campaign of 1918. The Y.W.C.A was the first organization to send administrative workers overseas to assist the U.S. Armed Forces during World War I. Posters like this one dealt with the new image of women and their roles in a way that contributed to the war effort without being overtly liberal in the sense of gender equality. WWI era America was a boon to the woman suffrage movement and eventually turned the tide in favor of the passage and ratification of the 19th Amendment in 1919 and 1920, respectively.