His home over there--More than 2000 such homes for our boys United War Work Campaign, November 11th - 18th 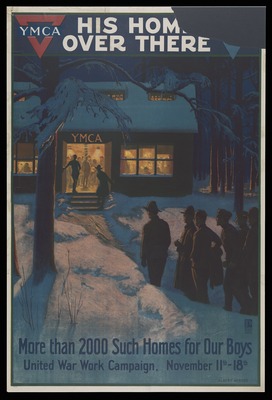 You may view an undamaged version at the Library of Congress: http://www.loc.gov/pictures/collection/wwipos/item/00653324/

His Home Over There

This poster was designed by Albert Herter (1871-1950) for the United War Work fundraising campaign, which took place from November 11th through the 18th, 1918. Born in New York in 1871, Herter had a successful career in painting and interior design, as well as illustration. He began designing WWI posters in honor of his son Everit, who served and was killed in the war in 1918. The United War Work Campaign raised funds to help provide American soldiers overseas with the necessary essentials as well as entertainment to boost their morale such as: movies, libraries, gymnasiums, and swimming pools. President Wilson organized the United War Work Campaign fundraiser to raise 170 million dollars to help fund and pay for demobilization. The fundraiser lasted for a week and included organizations such as the YMCA, the YWCA, the American Library Association, the Knights of Columbus, the Salvation Army, and the Jewish Welfare Board. The weeklong campaign raised 203 million dollars--the largest fundraiser in history at that time.

Many of the posters for the campaign, including this example for the Young Men’s Christian Association, depicted soldiers enjoying food, playing games, or having a roof over their heads. These images, including the one before you, where soldiers are entering a YMCA building during a cold winter evening, resonated with the American people, and made them feel as though they had to help provide for their fellow Americans overseas fighting in the war. The YMCA operated 4000 huts and tents near the front lines that provided recreation and religious services for American soldiers in their allies, as well as 26 R&R leave centers for soldiers in France. YMCA staff and volunteers also sent over hundreds of entertainers, worked with prisoners of war, supervised canteens, and served on troop trains. They became an indispensible part of the war effort.