To make the world a decent place to live in, do your part - buy U.S. government bonds Third Liberty Loan 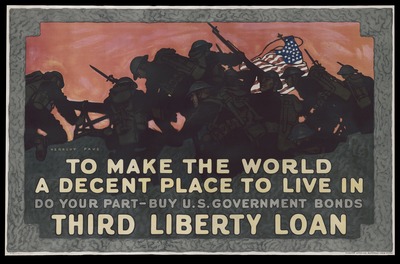 "To make the world a decent place to live in, do your part - buy U.S. government bonds Third Liberty Loan"

To Make the World a Decent Place to Live In

Herbert Paus became one of the most recognizable poster artists of World War I. This large poster in particular embodies his bold style and, above all, carries a weighty message. Paus depicts eight American infantrymen literally going “over the top” of a trench into the living chaos of war. The contrast of the bright red representation of fire and brimstone with the muted, almost silhouetted soldiers, visually symbolizes the American military going into the chaos of the Great War. Paus’s use of bright, contrasting colors draws viewers in and gets their attention. He also favored having characters in his posters who viewers could identify with. In this poster Paus depicts American soldiers valiantly charging into battle, proudly carrying the American flag. He did this to appeal to American patriotism and a sense of honor. The soldiers are making the world “a decent place to live in,” and the poster implores the civilian viewer to do his or her part in supporting their efforts through buying bonds, or risk the red German threat spreading to America.

The U.S Government’s third liberty bond drive, carried out in April of 1918, endeavored to raise three billion dollars of funds to support the war effort. As an incentive to buy, purchasers of the bonds were promised a 4.25% return on their investment. While war bonds were an essential way to pay for the cost of waging war, they also allowed ordinary citizens on the home front to feel as though they were doing their part, and thus boosted morale back home.