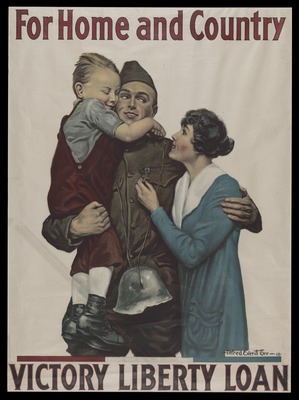 For Home and Country

The painter and portraitist Alfred Everitt Orr designed this poster, laden with patriotic symbolism, for the Victory Liberty Loan campaign of 1918. The Treasury of the United States issued four separate Liberty bonds in 1917 and 1918 in an effort to raise money to support the country’s war efforts. Civilians were encouraged to purchase these bonds, and would receive three to four percent interest when their bonds matured in the decade following the war. In order to ensure and increase the sale of the bonds, Treasury Secretary William McAdoo recruited artists, movie stars, and Boy and Girl Scouts to support the effort, and created a wide variety of literature and propaganda for the campaigns, such as this poster.

In this poster, Orr utilizes the patriotic red, white, and blue colors to focus the viewer on the central scene, a young mother and child embracing their husband and father. It is clear from his wrinkled uniform and battered helmet that the soldier has returned from the front. His wife gently fingers his distinguished service medal as she gazes at him lovingly. This happy family scene echoes what thousands of Americans hoped to experience when their own soldier returned from “over there.” The poster appealed to the patriotism and love of home and country of prospective viewers, and the Treasury Department hoped these sentiments would be enough to sell thousands of bonds throughout the United States. Millions of Victory Loan posters were printed and distributed throughout the United States, often displayed prominently on storefronts, in schools, post offices, libraries, and other community buildings.