Save Seed For Victory

US Department of Agriculture 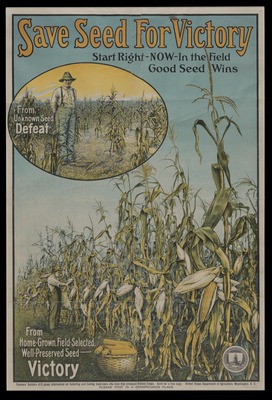 Save Seed For Victory

During World War I, agricultural workers from all over Europe were recruited into military arms, leaving thousands of farms to become decimated into battlefields on the Western and Eastern fronts, and a scarce amount of food to support the war efforts and home front populations. As a result, this burden of feeding millions of starving people largely fell to the United States. In March of 1917, weeks before the United States entered the war, Charles Lathrop Pack organized the National War Garden Commission to encourage Americans to contribute to the war effort by planting, fertilizing, harvesting and storing their own fruits and vegetables so that more food could be exported to our allies, and eventually to US soldiers abroad. Citizens were urged to use all idle land not already engaged in agricultural production—including schools, companies, parks, back yards, and vacant lots. This movement was promoted through propaganda posters and word of mouth throughout the country.

The “Save Seed for Victory” poster was commissioned by the U.S. Department of Agriculture’s Food Administration in 1918, and was printed by A. Hoen & Co. of Baltimore, Maryland. The poster urged farmers to save seeds from their crops as part of the “Seeds of Victory” campaign, commonly grouped with the Victory Gardens movement. The goal of “Seeds for Victory” was to encourage farmers and every day citizens to save seeds from their fruits and vegetables so that they could plant and grow higher quantities of produce to export overseas. This poster features a man too old to enlist harvesting giant, healthy ears of corn grown from strong seed; the upper left hand corner depicts the dangers of unhealthy seeds, and the prospect of armies defeated by lack of food supplies. Victory Gardens and seed campaigns gave those who were on the home front, and not fighting in the trenches, a purpose towards the war efforts.