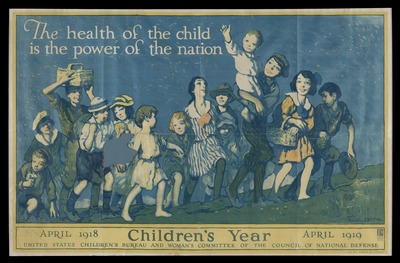 "The health of the child is the power of the nation. April 1918. Children's Year. April 1919. UNITED STATES CHILDREN’S BUREAU AND WOMAN’S COMMITTEE OF THE COUNCIL OF NATIONAL DEFENSE."

The poster “Children’s Year,” painted by Francis Luis Mora in 1918, depicts a crowd of children of varying ages and social backgrounds marching up a green hill with picnic baskets as the youngest of the group waves them on. The scene in this poster mirrors scenes from many other World War I posters in which the viewer is being encouraged to join the fighting by high-ranking soldiers and beautiful women. The major difference, however, is that this poster endeavors to capture the viewer’s patriotism in order to encourage them to take part in preserving the nation’s youth, instead of continuing the fighting in Europe.

The Children’s Year campaign, sponsored by the federal government’s Children’s Bureau, began in April of 1918 as a way to study and overcome preventable diseases that were killing infant children and thus reduce infant mortality. It soon evolved into a myriad of small reforms and improvements to the lives of children, including the formation of child welfare organizations in many states across the country and an emphasis on the importance of play and recreation in a child’s development. As a part of the campaign, President Woodrow Wilson even wrote a letter to his Secretary of Labor, in which he laid out his plans to lessen the work hours for children in the factories and to create scholarships to help pay for their schooling. Today, the Children’s Bureau is part of the Department of Health and Human Services.