See him through--Help us to help the boys 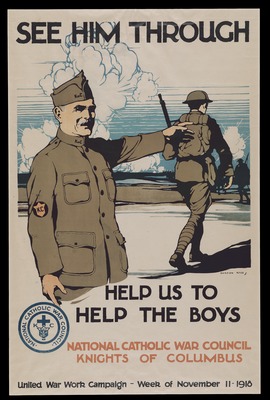 "SEE HIM THROUGH. HELP US TO HELP THE BOYS. NATIONAL CATHOLIC WAR COUNCIL. KNIGHTS OF COLUMBUS. UNITED WAR WORK CAMPAIGN. WEEK OF NOVEMBER 11, 1918.

Similar to a few other posters in this exhibition, the poster “See Him Through, Help Us to Help the Boys,” was created for the week of November 11, 1918, to raise money for the end of the war and subsequent demobilization effort through the United War Work Campaign. This poster was created by Burton Rice and sponsored by both the Knights of Columbus and the National Catholic War Council who, despite their differences, came together to help fundraise for the United War Work Campaign. The poster was most likely created in very early November after word had spread that the Germans had agreed to sign an armistice. This poster is different from many others created during the era of the Great War because it aimed to fundraise money for the end of the war. While traditional propaganda qualities exist within the poster itself, such as a call to patriotism, it is not as heavy-handed as other posters created during the era. The poster’s slogan, “See Him Through,” emphasized the fact that the men overseas in Europe still needed help and funds to finish through the end of the war until their eventual return home to the United States. At the end of the war, partially due to their success in assisting with the United War Work Campaign, the newly created National Catholic War Council became the more permanent National Catholic Welfare Council, and the Knights of Columbus, a prominent Catholic Men’s organization founded in 1882, recruited upwards of 400,000 new members.