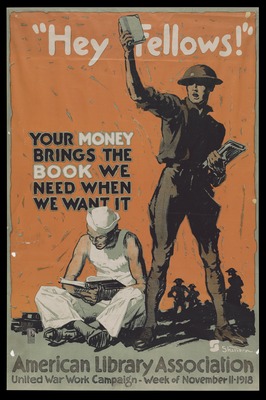 "'HEY FELLOWS!' YOUR MONEY BRINGS THE BOOK WE NEED WHEN WE WANT IT. American Library Association. United War Work Campaign – Week of November 11, 1918.

The World War I poster “Hey Fellows!” was created by John E. Sheridan for the American Library Association (ALA) in November of 1918. A prolific illustrator for the Saturday Evening Post, Sheridan was commissioned by the American Library Association to create a poster to advertise their efforts in the war. Throughout the war, the ALA served as part of the United War Work Campaign to raise money for war relief efforts both in the United States and abroad. Recognizing the importance of libraries, the ALA launched the Library War Fund. In 1917 and 1918, the American Library Association collected over five million dollars in donations for the Library War Service, resulting in the erection of thirty-six libraries across the United States and Europe. Distributing over 350,000 books overseas, the ALA successfully provided literature to hundreds of thousands of servicemen. Amidst the despair, loneliness, and ceaseless horror of war, the ALA libraries and their books served as beacons of hope to the servicemen, providing a form of escapism, and a vision for the future. Created during the week of the armistice, Sheridan’s poster is an emotional call for donations to the Library War Fund. Thrusting his book in the air, the soldier demands our attention, reminding viewers that such donations do not just provide food and supplies, but also sustenance of the mind.