Oh, boy! That's the girl! The Salvation Army lassie--keep her on the job 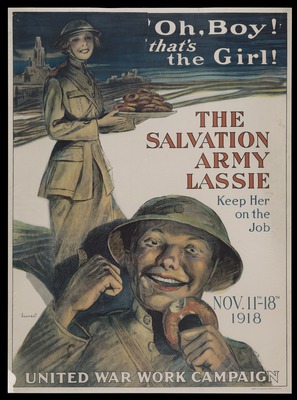 This poster was created in November of 1918 by George M. Richards and published by the Sackett & Wilhelms Corporation in New York. The poster was sponsored by the Salvation Army, as part of the United War Work Campaign, in order to solicit donations and encourage women to continue joining the Salvation Army as the Great War came to an end. The poster features a young, beautiful woman with a wide smile carrying a tray of doughnuts, standing behind a soldier. The soldier gestures back at the young woman approvingly as he takes a bite from a doughnut. The poster was meant to stress the importance of the support work the Salvation Army Lassies did, such as cook for the soldiers, pray for them and write letters back home to their families. The Salvation Army sent roughly 250 volunteers abroad in 1917 to provide emotional and spiritual support for American soldiers in France, and their allies. They set up huts near the front lines and frequently served hot coffee and fried doughnuts in soldiers’ helmets, earning the nickname “Doughnut Lassies” in the process, as evidenced on this poster. This well-received war work raised the profile of the Salvation Army during the war, and they continued this service on the front lines during World War II as well.