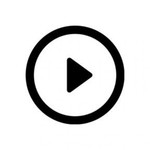 WMPG celebrates the lives of Black men and women throughout the month of February. Born in 1912 Kansas, Gordon Parks used the camera as his weapon of choice to fight against poverty, racism, violence, and inequality. He worked with all economic and social levels.