The Men of Searsport

The Sons and Daughters

Located just off Route 1 in historic Searsport, the area known as Mosman park has been used as a recreational area for generations. Thanks largely in part by the generosity of the Mosman family, who took it upon themselves to maintain the area for all to enjoy. In 1922, a group of private citizens formed the Mosman Memorial Park Association and purchased the 4-acre plot of land from the Mosman family heirs. In 1923, the park was officially dedicated to all those who fought in the First World War.

The stone that the plaque is fixed on was brought in from the nearby Swan Lake, another popular recreation area. At the park, you will find a softball/soccer field, a playground for smaller children and a basketball court. Behind the park, you will find steps that go down to the beach where locals can go swimming, skip rocks or if your timing is right, walk out on the sand bar. It offers a beautiful view of the Penobscot Bay, nearby Sears Island and, on a clear day, you can even catch a glimpse of the many islands that line the Maine coast.

Every year the town has a Memorial Day parade that goes through Main Street and eventually ends at the park. It is here that a trumpet and snare drum player from the high school band plays taps as the sounds echo through the bay, followed by a rifle salute by members of the local V.F.W. The Park is an excellent example of a living memorial to the war, and a fantastic way for generations to come to gather some knowledge of it.

This work is licensed under a Creative Commons Attribution-Noncommercial-Share Alike 3.0 License. 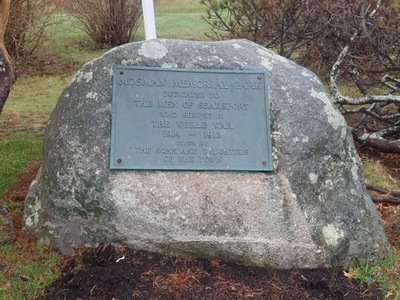