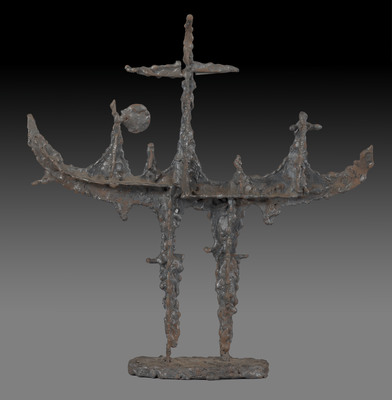 This is a scale model of the sculpture that now stands on the USM Portland campus.

In October, 1967 the Student Senate voted to look into the possibility of obtaining a piece of sculpture on a Viking theme to serve as the campus symbol. The Art Department was contacted and the Spring of 1968 brought a model of a sculpture by Mr. John Risley of Wesleyan Univer­sity, called “The Viking Ship and the Midnight Sun”. After much discussion pro and con (some students wanted a 10’ tall statue of a Viking in full battle regalia), the Senate agreed to the model, and it was completed and received by December, 1969. A decision for its placement was finally made. The base was constructed and the Ship was ensconced in the outdoor court of Luther Bonney Hall.