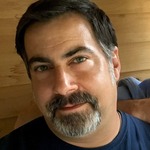 Robert Diamante is a photographer from an Italian America family from New Jersey. He also has a graduate degree in theology. At an early age, he began to doubt religious dogma. He came out as gay in 10th grade and stood up against homophobic taunting by successfully physically defending himself. He briefly had a girlfriend in high school who remains one of his best friends. He moved to NYC and attended Pratt University before transferring to the Portland School of Art (now MECA) where his interests in art and theology combined in a body of work based on Catholic iconography (those photos are now part of the Sampson Center LGBTQ collection). At the Portland School of Art he studied with Agnes Bushell and, through her, met gay author John Preston. Diamante did fact-finding on the Big Gay Book for Preston and photographed him for Flesh and the Word. Through Preston, he met and befriended porn star Scott O’Hara and became aware of and involved with the AIDS epidemic. In 1992 he began a charter member of the Gay Men’s Chorus in Portland, Maine (his photos of the Chorus are also donated to the collection). One of his early photo exhibitions was “Boyfriends/Girlfriends” with lesbian photographer Jen McDermott. After graduation, he started a photography business and stayed in Maine where he found other gay men who enjoyed such pleasures as camping and hunting. He also began traveling, first to India, Papua New Guinea, and Bali. He continued his studies at Bangor Theological Seminary where he received a graduate degree in 2010.