Bird's Eye View of the Cities of Biddeford & Saco, York County, Maine. as seen from the North East. 1875 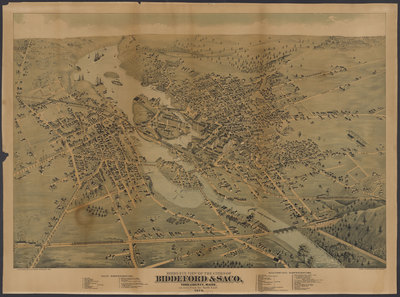 Maine’s first major textile manufacturing center was established in Saco and Biddeford to take advantage of the Saco River’s waterpower. Located on the river’s eastern shore, Saco developed first, with the York Manufacturing Company cotton mill, constructed in 1831. By the 1850s one thousand workers were producing cloth in five York mills. On the river’s west side in Biddeford, sixteen hundred men, women, and children were employed in three cotton mills of the Laconia Company and another thousand in the three cotton mills of the Pepperrell Company.

Mr. W. R. Patchen is in this city and is exhibiting to our leading citizens a most accurate sketch of Biddeford and Saco. It presents a sort of a “bird’s eye view” of both cities and shows plainly every house, street, and vacant lot. If a sufficient number of subscribers can be had the drawing will be lithographed in colors and delivered. Mr. Patchen has “done” nearly all the important cities of the West and Canada, and his drawing in every instance has been most favorably received. It is a pleasant picture to look upon for those at home and a pleasant reminder to send to friends who have gone away. Moreover, it is a valuable thing for reference, and if a city is so disposed it may be used to advantage as an advertisement.

The contemplated “Bird’s Eye View of Saco and Biddeford” has become an established fact. Mr. Patchen, the agent, has a secured sufficient number of subscribers, and the sketch has been sent off to the lithographers. It will probably be ready for delivery sometime in July next.

Mr. Wm. R. Patchen, who canvased our city for this work, was in our office today. He came to Biddeford to deliver his pictures to subscribers, but finds on examining the views that an accident in the lithographing has made some defects, and not feeling willing to impose on the good will of his subscribers or injure the reputation the company has established for making first class work by trying to put off a defective lithograph, he has reluctantly been obliged to refuse to receive the views and has returned them to the lithographers, and the sketch has been placed in the hands of first class artists and will be lithographed again as soon as it can possibly be done. This will delay the work a few months, and it cannot be delivered before fall. This is as it should be. We can assure Mr. Patchen that his subscribers will be glad the company insisted on having first class work and will willingly wait until it can be done in good style, as nothing is lost by the delay.

We have been shown a specimen copy of W.R. Patchen’s Bird’s-eye View of the cities of Biddeford and Saco, and we are much pleased with a work which will not only prove useful, but ornamental. It is remarkably correct in its execution, not merely defining the various streets and roads, but depicting individual houses so as to be at once recognizable, every building being distinctly drawn. As may be readily supposed, the colored picture of a locality so full of attraction for the artist is readily an object of art and is well worthy of a place on the wall of any room, while its remarkable correctness renders it not merely a substitute for, but something far superior to maps drawn on the ordinary plan, giving a clear idea of location and representing distances in perspective. The same artist has executed similar views of other cities in various states and the Dominion of Canada, which have been deservedly well received, as the opinions of the local press abundantly testify.

As a publicly supported institution, the Maine Historic Preservation Commission generally does not own rights to material in its collections. Therefore, it does not charge permission fees for the use of such material and cannot give or deny permission to publish or otherwise distribute material in its collections. The copyright and related rights status of the items in this collection have not been evaluated. While many of these images may be in the public domain, it is up to you to determine and satisfy copyright or other use restrictions when publishing or otherwise distributing materials found in this collection. You are free to use an item in any way that is permitted by the copyright and related rights legislation that applies to your use.