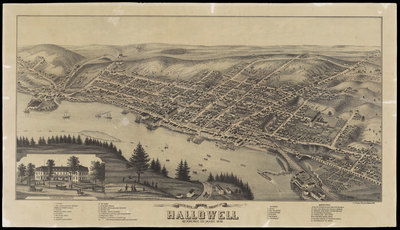 The city is situated on the western bank of the Kennebec River, at the head of steam navigation….The streets and terraces of the village on the curving hillside form an amphitheater about a little harbor made by the broadening of the river. The attractiveness of this picturesque village is further enhanced by old apple-orchards at various points and shade-trees along the streets. The steams are the Kennebec, which forms its eastern boundary, and Vaughn’s Brook….The power on this stream is now made useful in running a wire-factory, saw and other mills, near its junction with the Kennebec. The other manufactures are the Hallowell Cotton Manufacturing Company, running 17,000 spindles; two oilcloth factories — Sampson’s and Wilder’s — employing respectively 55 and 30 men; a brass and iron foundry, and the Hallowell Granite Company, which produces about $350,000 worth of wrought stone-work annually. Most of this is from the white granite of the Hallowell quarries. Many notable monuments and buildings have been constructed from this granite, wrought in the shops at Hallowell.

Many citizens of Hallowell will undoubtedly remember the German artist Prof. Ruger, who was in this city last fall gathering material for a pencil sketch of Hallowell and vicinity. We have just been shown the results of his work showing every street and home in the city, general features of the landscape, the Kennebec, etc. A proposition has been made to have this picture lithographed, and it is being shown to our citizens by Mr. W. R. Patchen, with a view of obtaining a sufficient number of subscriptions to warrant publication. Similar views of Bath, Gardiner and Waterville have in each case given good satisfaction; in the city of Bath, the enterprise was especially well encouraged, and we doubt not the citizens of Hallowell will appreciate the real value of the work.

We have examined with much interest a pencil sketch, embracing every street, lane, manufacturing establishment, public building and private dwelling in the city, together with a view of the river, wharves, &c. and when lithographed, a perfect picture of the city will be presented, serving the purpose of a map as well as a complete representation of the shape and appearance of every house and building, and their exact location. Our citizens will undoubtedly appreciate the value of this view, and will no doubt subscribe for a sufficient number to enable the proprietors to go on with the enterprise without loss or discouragement. Similar views have been made of other towns and cities in this and other States; and in view of the great expense attending sketching and lithographing, it requires a large number of sales to ensure fair remuneration. Mr. W. R. Patchin is engaged in obtaining subscribers in this city, and will afford an opportunity for all to secure copies of the work. He is not one of the urgent kind of canvassers, and no one will be in any danger of being “talked to death” by him.

Morse is also framing the new and accurate “Bird’s eye view of Hallowell,” in an artistic style.