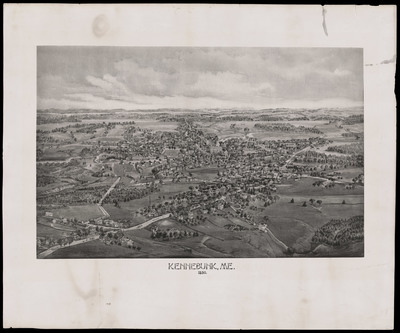 The buildings throughout the town are generally in good condition; and among them are some which were erected very early in the existence of the town. Along the roadside at many points are noble elms and maples, many of them from fifty to a hundred years old. On the Mousam River near Alfred is a natural stone dam, with a fall of 45 feet. This is known as Great Falls, formerly Fluellen Falls. The entire fall in the Mousam from this point to tide-water, is about 150 feet, affording several excellent water-powers. At the second fall above tide-water there is a sash and blind-factory, a saw and shingle-mill, and a machine-shop. The third is improved on the western bank by a shoe-factory, and on the eastern by a grist-mill. Above is a twine-factory….At Varney’s Falls, still further up the stream is a lumber-mill….The Mousam Manufacturing Co., at Kennebunk Village, produces a good article of leather board in large quantities. There are also a plough-factory and several ship-yards.

George E. Norris of Brockton, Massachusetts is in town preparing a sketch of a bird’s eye view of Kennebunk, from which to make a photogravure. These pictures are suitable for framing and can be sold at a reasonable price.

George E. Norris has nearly completed an India ink sketch of the village of Kennebunk, from which will be copied a photogravure.

George E. Norris, who is perfecting a bird’s eye of the town of Kennebunk, has a truly fine thing and is receiving the patronage which belongs to him. It is only to be seen to be appreciated, and the low price is within the reach of all.

Mr. Norris was here Monday to deliver the Kennebunk photogravures, but found the goods had been shipped without printing the color tint, which has necessitated their return to be finished. It will doubtless delay the delivery a week or more.

Mr. George E. Norris of Brockton, Massachusetts has been in town this week delivering the photogravures of a Bird’s Eye View of Kennebunk. These views are a work of art and should be in the hands of the Kennebunk people, and especially those who have not seen Kennebunk for a number of years. They can be procured for $2.00 at this office or by addressing the publisher.