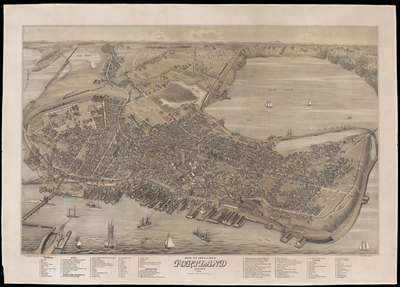 On the 4th of July, 1866, a carelessly thrown cracker set fire to a boat-builder’s shop on Commercial street, whence the flames were soon communicated to Brown’s Sugar House; whence it swept on diagonally through the city spreading like a fan as it went….The morning saw fifteen hundred buildings laid in ashes, fifty-eight streets and courts reduced to a wilderness of chimneys, amid which the most familiar inhabitant lost himself; ten thousand people made homeless, and ten millions of property destroyed. Villages of tents and barracks sprung up on Munjoy….In rebuilding, old streets were widened and straightened, and new ones opened; and, after a lapse of ten years, the waste places were almost wholly rebuilt, far more roomy, convenient, and handsome than before. Meantime, the increase of the business facilities of the city went on. In the same period, various manufacturers sprang up within the city or in its vicinity, as the rolling of railroad iron, the making of carriages, shoes, matches, stoneware, and drainpipes….In 1870, Lake Sebago water was introduced by aqueduct all through the city, and the sewerage rendered more complete. Broad and regular streets, handsome and substantial business blocks, elegant and commodious dwellings, good drainage, well-lighted streets, pure water, excellent air, convenient conveyance in and out of the city, by horse and steam cars,—numerous shade trees, unsurpassed views of sea and shore, good schools, well-attended churches, and a moral, industrious, enterprising and courteous people—these render Portland one of the most desirable cities for a home and business.

Mr. Joseph Warner is canvassing the city for subscribers for a picture of Portland, mind you, and not a map. An examination of the work shows that nearly every block and even house is clearly and accurately given. We consider the work one of great value to our people, because it is so accurate and everything is so well defined. To make the work a success Mr. Warner must get about 300 subscribers at $4 each. He has already secured a good number, but still many names are required to secure the number to pay. Some parties have taken a half dozen. The picture was accurately sketched by Augustus Koch last fall and the past spring. We repeat: Those who desire an accurate picture of Portland should subscribe at once.

The newspapers have, during the past few weeks, at various times, announced that Mr. Joseph Warner was soliciting subscriptions for a picture of Portland from an original sketch by Augustus Koch and others last fall and the past spring. He has met with fair success, but we desire to remind our citizens that this is one of the most valuable, reliable and desirable works of the kind ever presented to the public. It is a bird’s eye view picture and not a map. To ensure the success of the enterprise 300 copies are necessary, and it is hoped the requisite number will at once be secured. In several cases the city has purchased a large number of such pictures and sent them to the authorities in other cities as giving some comprehensive idea of the situation and character of the place.

Now Portland is, as everyone knows, one of the most beautiful cities in the country, nearly surrounded with water, the harbor and the islands, and the sea in front; Fore River and the inland country on the west; Back Bay and the rural scenes beyond on the north, and the charming Casco Bay on the east, the city being long and narrow, thus rendering its water approaches in cases of fire easy. The elevations at either extremity, the grand wharf, railroad and steamship facilities; these and other things all being shown in this picture, makes it one of the best descriptive advertisements of Portland that can be given, and we should regard it as a wise thing for the city to order a lot for municipal distribution. Certainly every merchant should subscribe for several. Every leading hotel in the country should have one in its reading room or office. Every insurance company doing business here should have one in its home office, and every agent one in his office here. The publisher is Mr. J. J. Stiner of Madison, Wis., who has issued these pictures of a large number of leading cities, North, South, East and West. They are printed at the lithographic establishment of Messrs. Chas. Shober & Co., Chicago, whose pictures of other cities, so admirably done, are a guaranty of the excellence of this one. The size is large and gives distinctly every street, house, building, wharf, and railroad, including the Marginal Way. We hope that the 300 and more too will be at once subscribed, and thus another good point be made for our city.

The publishers of the Birds Eye Views of Portland will deliver the views about the middle of the month.

It will be remembered that last summer Mr. Joseph Warner visited this city and canvassed for a bird’s eye view of the city and vicinity. He has now returned in company with Mr. W. R. Patchen and will at once commence the delivery of these fine pictures. They are lithographs representing every building and street in the city, also, the buildings at Libby’s corner. Back cove and Ocean street in Deering are shown very plainly. The picture is an excellent one and at first resembles a steel engraving. A large number of references are given by figures showing the several churches, hotels, schools and public buildings. Those who have subscribed for the work cannot fail to like it as it is much superior to what was promised. After a careful examination of the picture yesterday a gentleman who is well acquainted in the city pronounced it correct in every particular.