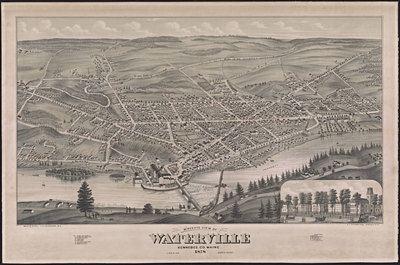 Waterville lies on the western bank of the Kennebec River….The eastern and western lines of the Maine Central railway form a junction at the village; and extensive repair shops of the railroad company are there located. The principal stream in town is the Messalonskee, which furnishes power near the village for several manufactories, among which are a grist-mill, a sash and blind factory, a shovel-handle factory, a tannery, a boot and shoe-shank factory, etc. On the Kennebec are two large cotton factories of the Lockwood Company, and one or two saw-mills….The village itself is built along rambling streets shaded by elms on a broad plain above the river, where are many pleasant residences, and several with park-like grounds. Near the railway station, are the buildings of Colby University, two of them elegant structures of stone, and the remainder of brick. The grounds, which descend to the river in successive terraces, are well shaded about the buildings by elms, and below by native trees and shrubbery. The flowing river, and the high shore opposite form an attractive background.

Messrs. Ruger & Stone, of Chicago, are getting up bird’s-eye views of several cities and towns in Maine, which are unique, being both pictures and maps, - making a handsome presentation of each place as a whole, with the elevations of all the buildings, streets, the most of the shade trees, &c. They are accurate, ornamental and convenient, and their value will increase with age. They have completed views of Portland, Bangor, Biddeford and Lewiston, and have others in progress, and the people are delighted with them. They propose to include our village in their list, and their plan of operation is this: After the preliminary survey, which is by actual examination of every building, they make a sketch in pencil, and this is seen by the citizens before they are invited to subscribe. If a sufficient number of subscriptions are obtained, the work is lithographed and furnished at an agreed price. They propose to commence work here soon, and we are confident our people will be so well pleased with what they offer that they will find no difficulty in obtaining the requisite number of subscriptions. P. S. They are already here and have commenced work.

Birds-Eye View of Waterville. – It will be remembered that about two months ago we gave notice that Messrs. Stone and Ruger were making surveys and other needful preparations for a lithographic view of our village, which would be both a picture and a map, ornamental and useful, and the value of which would increase as the years roll on. Now we have to announce that the proof sketch in pencil is completed, and that Mr. Joseph Warner is here to present it to our citizens for correction and approval. If one hundred and twenty-five subscribers are obtained at $2.50 each, the work will be lithographed and the copies furnished at an early date. We cannot believe that the result is doubtful but feel assured that our people will not allow the enterprise to fail for lack of approval and patronage. They are not called to “buy a pig in a poke” – to use a homely but expressive illustration – but every man can see for himself what he is to have, and that is the best representation of our village ever made. It presents every street, and every building, public and private, with the river, stream, railroad, bridges, etc., and these will all be brought out distinctly in the lithograph, making both a handsome picture and a correct map for reference. In one corner will be found a separate and enlarged view of the college buildings.

Mr. Warner, the soliciting agent, finds it takes more time to secure the necessary number of subscribers – one hundred and twenty-five – than he supposed it would. He has taken the names of ninety only as yet. Of course our people will not allow the work to fail for the lack of a few names. Mr. Warner, who is himself an accomplished artist and a fine portrait painter, has made several pretty sketches of the Old Block House on Fort Point, from various points, with the surrounding scenery.

Mr. Warner, the soliciting agent for the Bird’s Eye View of Waterville, has secured the number of subscribers necessary to ensure the publication of the work, and is now engaged in similar service for a view of Fairfield Village. The lithographs will be delivered in the Spring – probably in April. Only about the number needed to supply subscribers will be issued, and persons at home or abroad who desire a copy will do well to speak in season.

Subscribers for the Bird’s-Eye View of our village, may look for their copies soon. On down river neighbors are receiving theirs.

The Bird’s Eye View of our village, in course of preparation by Messrs. Stone & Ruger, is nearly ready for delivery and subscribers will probably be served about the middle of this month. We feel confident it will give satisfaction.

The Bird’s-Eye View of Waterville will probably be delivered next week. Mr. Patchen, the delivering agent, awaited the arrival of the pictures here for several days, but has now gone to deliver to towns down the river.

Mr. Patchen, though hindered by bad weather, has about finished the delivery of the views of our village, which have given good satisfaction. The number of views printed for a town is limited by the subscription list, only a very few spare ones being provided to cover accidents, and they are never thrown upon the market. If any old residents of Waterville desire copies, and will send to us while the delivering agent is in this vicinity, we will be pleased to mail them, to a limited extent at the subscription price — $2.50.

The Birds Eye View of Waterville, of which a few copies remain undelivered to subscribers, may be seen at the Mail office, where several copies can be supplied to outside purchasers at subscription prices. Those who call first will get them.