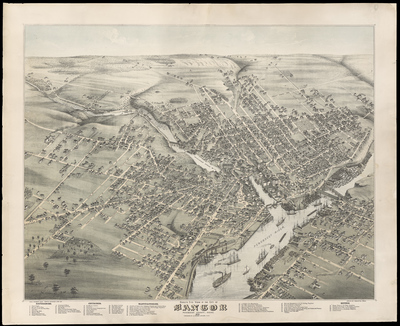 Situated on the Penobscot River midway between vast forests and the coast, Bangor was one of the nation’s largest lumber ports with its trade extending to the West Indies and Europe. Shipyards on both sides of the river supplied the vessels to transport millions of board feet of lumber to market each year.

Bird's-Eye View of Bangor. The prospective introduction of water into the city, the building of new school-houses, the performances of the Amateur Minstrels, and some other things, are evidently giving the Queen City of Maine an impetus, the reputation of which is not confined to the limits of the commonwealth. Mr. J. J. Stoner of Madison, Wis., having published a bird’s-eye view of the principal cities of the Union, appreciating the enterprise and importance of Bangor, has been engaged in preparing for publication a bird’s-eye view of our municipality. The original sketch has been made by Mr. A. Koch, locating the several streets, and giving each building and prominent object as it would appear to a man “up in a balloon.” Aside from its topographical correctness, the picture will be worthy of preservation by our citizens, and, should sufficient encouragement be received, Mr. Stoner will publish it as a lithograph of a size amply large to meet the requirements of such a work.

We learn that Mr. Stoner is meeting with success in his canvass for subscriptions for the bird’s-eye view of Bangor which he has prepared for publication. It is a fine work, and will prove both useful and ornamental.

Mr. J. J. Stoner writes that he expects to commence delivering the Bird’s-Eye views of Bangor in a week or ten days.

If you have the new picture, “Bird’s Eye View of Bangor,” have it framed at DAKIN’S and get the benefit of his extremely low prices, which will continue for a few days longer.

Bird’s Eye View of Bangor, Neatly framed in Black Walnut and Gilt, for $2.25 and upwards, at DAKIN’S, Corner Main and Water sts.