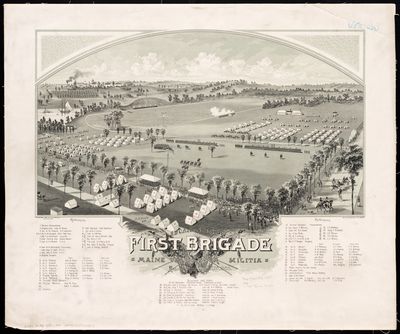 It was our privilege to behold Governor Robie and Staff (with a big S) and the state militia, last Thursday afternoon. The soldiers looked finely, but some of the companies had but very few men we thought. The Staff was not lacking though, and with their golden regalia were the center of admiration. The Maine militia may not be very impressive so far as privates go, but it has a full complement of as good looking officers as any state militia, and they no doubt will see to it that the country is safe.

A Fine Lithograph. We have received from A. F. Poole & Co., lithographic publishers in Brockton, Mass., a splendid lithograph of the late encampment of the First Brigade, Maine Volunteer Militia at Augusta. The men are shown on parade and everything about the grounds is carefully transferred to paper. Every tent is in its proper position and all the minor details were carefully attended to. The artist was Mr. A. F. Poole. All of the principal objects about the encampment ground are numbered and a directory of these accompanies the lithograph.

High-resolution imagery for most maps and objects in our Digital Collections is available for download directly from each object’s record page in TIFF and JPEG format. Unless otherwise noted, all images are in the public domain and have no restrictions on use. We provide no warranty as to the copyright status of the objects themselves.

Courtesy of the Norman B. Leventhal Map & Education Center at the Boston Public Library