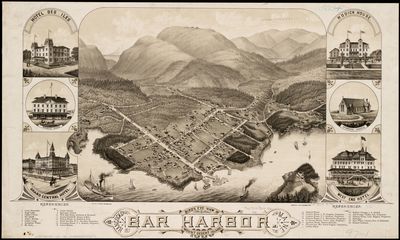 Good board can be had at the boarding houses for one dollar a day. If you are coming here to spend the summer, take along your thick clothing. The number of summer guests in Bar Harbor and its suburbs is probably about four thousand….Business is so good at Bar Harbor that people come in from all the towns about to get work….We believe the indications are that more money is to be spent on dwelling houses and cottages than on hotels for the next twelve months.

Mr. A.F. Poole has completed a sketch of Bar Harbor which will be lithographed and ready to be delivered next July. The picture will show the Rodick, West End, Des Isles and Grand Central Hotels in the margin, Green Mountain in the background, and a portion of the harbor and Bar Island in the foreground

A series of interesting photographic views of old Bar Harbor and its vicinity have recently been donated to the Belmont Hotel....Two birds-eye views, taken from an elevated position on Bar Island, respectively dated and issued in 1880 and 1886, and photographed from the engravings, are most interesting, as a careful comparison of the pictures is valuable, showing the rapid growth, and many notable changes that took place during the intervening years, and indicate also a period of great prosperity and development. The signature of A. F. Poole as artist appears on the earlier engraving, it being published by J. J. Stoner of Madison, Wisconsin, and lithographed at Milwaukee. In the margin are inserted pictures of the Hotel des Isles, Grand Central, Rodicks and the West End, also the Bradley Block, and St. Saviours’ Church. The later engraving fills a larger space in order to contain the many additional buildings erected, being published by G. W. Morris of Portland, George H. Walker of Boston being the lithographer. It is believed that few of these remain, and it is therefore fortunate that the originals were accessible, and that copies could be obtained, as they give what is probably a correct representation of Bar Harbor and its surroundings in former days.

High-resolution imagery for most maps and objects in our Digital Collections is available for download directly from each object’s record page in TIFF and JPEG format. Unless otherwise noted, all images are in the public domain and have no restrictions on use. We provide no warranty as to the copyright status of the objects themselves.

Courtesy of the Norman B. Leventhal Map & Education Center at the Boston Public Library