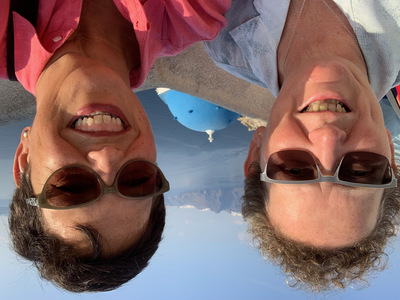 As a kid growing up in the suburbs just outside of Detroit I dreamed of joining the circus. The reality of picking up stakes and regularly moving was a part of my early childhood, so adding the circus element somehow made it seem exciting rather than what it sometimes was—a surprise of the greatest magnitude to learn that in an hour or two (or if I was lucky, a day or two) that we’d be on the road again in search of work for my dad. When we settled for any length of time, our home was a family to foster children of all ages. My adoptive mother, father, and I were the constants. The kids who passed through for a few weeks or months completed the other side of the circus equation. It’s no wonder that when I struck out on my own I was at ease in almost any situation, able to easily slip into the lives of strangers and always willing to feed a new friend or give them a place to rest on whatever early twenty-something journey they were on. Hospitality was my bloodline. When the early ‘70’s rolled around, I landed a job at a newspaper, answering phones, proofing copy, laying out pages, writing obituaries, and fetching coffee for the Sports Editor. The photographer took a shine to me, and I to his collection of cameras. I tagged along on assignments with him, picking up whichever loaded camera wasn’t being used and began a life-long love of viewing the world through the lens of a camera. As more and more of my photos from a shared roll were chosen to illustrate a story, I gradually left desk work behind and began to free-lance my photos, eventually landing work photographing the Virginia Slims Women’s Tennis Circuit. Once again, I was on the road, and while all of this was great fun and financially rewarding, after a few years of crisscrossing the country, I felt the need to let my cameras sit and my eyes rest. In 1980, I met Cheryl in San Francisco, we soon moved back to the East Coast, and our food adventures began.

Born in Chicago in 1957, I soon moved with my family to a mountain top in Rockland County, New York, and helped my parents build their house as their four-year-old assistant. I’ve been cooking all my life, starting out by my mother’s side: shaking sugar onto her warm, gooey jelly doughnuts; making eclairs for her ladies’ lunches; and building multi-course Chinese, Mexican, German, Italian and American dinners for the family. Who knew that all that cooking would become my life’s passion! I moved to the Bay Area to attend art school, anticipating a career as a ceramic artist. Instead, meeting my partner Norine and all those girls on Waldo Street in Somerville, Massachusetts, led us to that super-fun and challenging collective experiment of Beetle’s Lunch. We launched this whole new career path as a result of starting Beetle’s in what felt like an idealistic “community of now” in Boston--an era that pushed the boundaries of "normal" both in purity of food (no can openers there!), music, and political feminism. So many people taught and supported me all along the way— chefs, friends, customers, vendors, family, and especially my girl, Norine! Together, we felt such vitality in our yearning to grow and learn and, as women entrepreneurs, to push that boulder up the mountain!

Listen to the Oral History

This work is licensed under a Creative Commons Attribution-NonCommercial-NoDerivatives 4.0 International License.
Printing is not supported at the primary Gallery Thumbnail page. Please first navigate to a specific Image before printing.