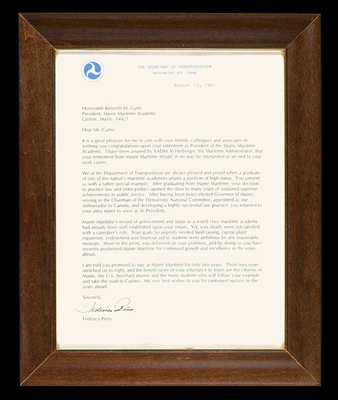 Wood plaque featuring a letter from Secretary of Transportation Federico Peña to Kenneth M. Curtis. The letter reads: "Honorable Kenneth M. Curtis President, Maine Maritime Academy Castine, Maine 04421 Dear Mr. Curtis: It is a great pleasure for me to join with your friencs, colleagues and associates in wishing you congratulations upon your retirement as President of the Maine Maritime Academy. I have been assured by VADM Al Herberger, the Maritime Administrator, that your retirement from Maine Maritine should in no way be interpreted as an end to your work career. We at the Department of Transportation are always pleased and proud when a graduate of one of the nation's maritime academies attains a position of high status. Your present us with a rather special example. After graduating from Maine Maritime, your decision to practive law and enter politices opened the door to many years of sustained superior achievements in public service. After having been twice elected Governor of Maine, serving as the Chairman of the Democratic National COmmittee, appointed as out Ambassador to Canada, and developing a highly successful law practice, you returned to your alma mater to serve as its President. Maine Maritime's record of achievement and status as a world class maritime academy had already been well established upon your return. Yet, you clearly were not satisfied with a caretaker's role. Your goals for urgently needed fund raising, capital plant expansion, endowment and financial aid to students were ambitious by any reasonable measure. More to the point, you delivered on your promises, and by doing so you have securely positioned Maine Maritime for continued growth and excellence in the years ahead. I am told you promised to stay at Maine Maritime for only two years. Those two years stretched on to eight, and the beneficiaries of your reluctance to leave are the citizens of Maine, the U. S. merchant marine and the many students who will follow your example and take the road to Castine. My very best wishes to you for continued success in the years ahead. Sincerely, Federico Peña"