IN HONOR AND MEMORY OF

THE MEN AND WOMEN OF

WHO SERVED IN THE ARMED FORCES

This monument honoring Cape Elizabeth residents serving in the Armed forces in eight wars (including WWI) is a rectangular granite slab set on three smaller granite steps. It is set in an area visible from Scott Dyer Road, and is approached by a small stone pathway, and surrounded by plantings (flowers and bushes). There is a flagpole with an American flag flying behind the monument. Inscriptions are found on both faces of the granite memorial--the front of the monument features an eagle perched on a bundle of sticks and situated in between two strands of wheat and a series of eight stars, while the back of the monument lists the wars residents have served in. 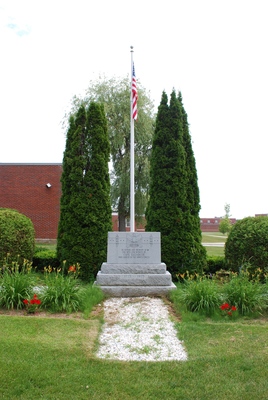