ERECTED TO THE MEMORY OF

BELOVED COMMANDER OF THE

ERECTED AND DEDICATED ON

Located in the small, triangular patch of grass known as Edwards Park, located across from the Portland Post Office on Park Avenue, this rectangular granite monument, with a rounded top edge, is set inside a raised patch of grass, framed by granite pavers. The monument features a bronze plaque inscribed to Major General Clarence R. Edwards, the Commander of the Yankee Division (26th) of the American Expeditionary Forces (AEF) during WWI. The plaque features a symbol with the letter Y inside of a letter D, signifying the Yankee Division, formed in August of 1917. In combat longer than any other American Division, the infamous Yankee Division--comprised of soldiers from the six New England states--was the first US National Guard unit (and the first complete American Division) to arrive in France.

A description of the memorial is given in the 1940 WPA Portland City Guide, and the entry notes that at one time (at least through 1940), the emblem of the Yankee Division was "worked into the ornamental flower circle on the High Street angle of the park” (pp. 241-242).

Edwards was a native of Cleveland, Ohio, and graduated from West Point in 1883. He served in the Spanish American War (in the Philippines). He was promoted to Major General in 1917, and charged with overseeing the Department of the Northeast upon the outbreak of the war. In August of 1917, Edwards, was charged with organizing the 26th Division, which landed in France in September. Edwards was removed of his command in October of 1918 by General Pershing. He retired from the Army in 1922, and died in 1931. Edwards is buried in Arlington National Cemetery, with his wife and daughter.

Camp Edwards, in Cape Cod, Massachusetts, is also named after the General.

To learn more about the 26th, or "Yankee," Division, which Maj. Gen. Edwards commanded during WWI, see: https://worldwar1letters.wordpress.com/the-adventure-unfolds/watchful-waiting-1917/26th-yankee-division/ 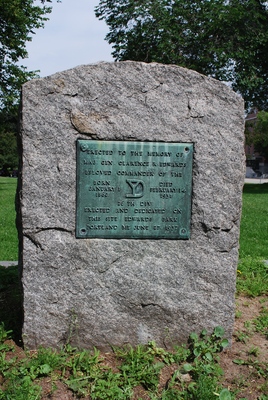