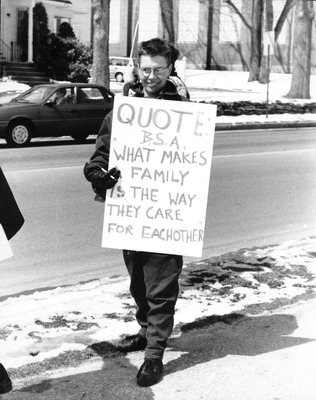 After the Boy Scouts of America (BSA) barred Terry, a lesbian, from becoming a den mother, protests followed. Terry went on to encourage LGBT parents to enroll their children in 4-H, asked the Portland United Way to defund the BSA of an estimated $82,000 a year, and asked local schools and public services that were supported by tax dollars to decline to provide the BSA with meeting space. Image description: Diane Elze outside the BSA Portland Headquarters; sign reads, "Quote: B.S.A. 'What makes family is the way they care for each other'"