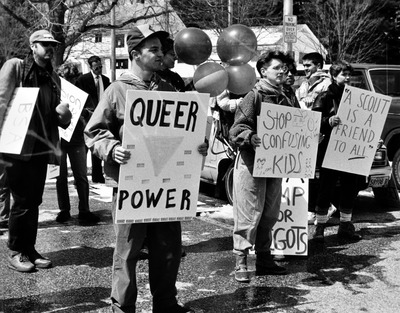 After the Boy Scouts of America (BSA) barred Terry, a lesbian, from becoming a den mother, protests followed. Terry went on to encourage LGBT parents to enroll their children in 4-H, asked the Portland United Way to defund the BSA of an estimated $82,000 a year, and asked local schools and public services that were supported by tax dollars to decline to provide the BSA with meeting space. Image description: Protests at BSA Portland headquarters in May 1992. John McLaughlin (second from right) holds the sign "Queer Power"; other signs read "Stop Confusing Kids", and "A Scout is a friend to ALL"