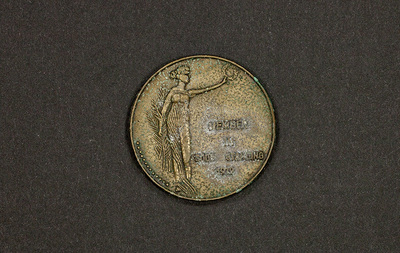 The front of the coin depicts a KKK member in stereotypical robed dress that hides the identity of the person. The member is riding a horse which is also wearing a white robe and looks as if it is “charging” or in some sort of battle stance. The writing on the edges of the coins read “Knights of Ku Klux Klan,” and, “Realm of Michigan.” On the back of the medallion, there is an image of a woman in goddess-type dress in a regal pose with the arm up and looking to the right. To the right of that figure it reads, “Member in Good Standing”.

The phrase on the back of the medallion, “Member of Good Standing” refers to a person or member of an organization when they have remained current on dues and payments [1] so it is likely that the medallion is a symbol of achievement of the Klan although we do not know for sure. The organization started to recruit new members by promoting the supremacy of the white race as a good thing that would make life better. The Klan described themselves as a "a constructive patriotic program” that would add to the community in a positive way for everyone. By promoting a good community, townsfolk were able to overlook the underlying racism that was also promoted, thus giving the organization thousands of new recruits. [2]

The first branch of the Ku Klux Klan, also called the KKK, originated from Tennessee in the 1860s. The KKK advocated for three main ideologies: white supremacy, white nationalism, and anti-immigration. These ideologies flourished in the southern states. Eventually laws passed in 1870 and 1871 lead to the falling of the Klan. About 80 years later, 1915, a second group of the KKK emerged. This one soon fell but a third, and current, group rose again after WWII.

Today there are many different types of KKK items that are collected. Collectors say they like to collect them because of their historical importance. Some of these items include: literature, robes, medallions, and many other memorabilia.

The Ku Klux Klan medallion dates to 1919 originating in Michigan. The medallion is about 1.5’’. It has different engravings on each side. One side has the image of Lady Liberty with the saying, “A member in good standing.” This quote refers to a member of the organization that keeps up to date on their dues and follows the rules and bylaws of the organization.

The other side shows a Ku Klux Klan member wearing a robe riding a horse wearing a matching robe. The words around this image reads, “Knights of Ku Klux Klan Realm of Michigan.”