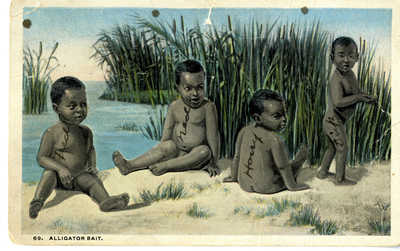 Written vertically on the back, and in the middle, of the African American Stereotype Postcard are the words C. T American Art with Curt Teich Co.’s publishing symbol. Between the years 1908-1928, Curt Teich published the postcards numbered A or R 1 to 124180. These tinted halftone cards represent Teich’s first serious effort to enter the postcard publishing business. Those with an R prefix were generally printed as bleed issued under the C.T. Photochrome name (Petrulis, Alan). This particular postcard seems to have the number R69810. Unfortunately, the Curt Teich Postcard Archives Digital Collection (Newberry Library) states that it wasn’t until 1922 that postcards became well documented. Based on the postmark the postcard was produced around 1918.

African Americans went through not only slavery, but through the Jim Crow era as well. “In the early part of the twentieth century the desire to make insulting fun [sic] of black people was expressed by the so-called ‘coon card’ craze” (“Coon Cards” 72). These “coon cards” would depict stereotypical, animal-like, African Americans. Typically sent to family and friends, the postcards illustrated African Americans, “as having thick lips, kinky hair, flat noses, big ears, and big feet. Negroes were portrayed as lazy, stupid, over-sexed, superstitious, lying, and thieving” (“Coon Cards” 72). The African American Stereotype Postcard has four naked African American babies, all in grassland area, being portrayed as “alligator bait.” Where the stereotype developed is unclear. However, in the autobiography of Solomon Northup, Solomon shares how “after having physically assaulted a White man who was coming after him with an ax, he had no choice but to flee into the swamp. He describes the hazards of navigating such terrain at night, and his efforts at avoiding contact with snakes and alligators” (“Coon Caricature”). This story explores the possibility of African Americans being used to lure alligators, by Southerners, as justification for slaves running away. Nevertheless, the callousness of using babies as alligator bait is not, by any means, explained. Postcards, however, weren’t the only form in which the “anti-Black alligator theme” (“Coon Caricature”) was advertised. Such products include: Little African Licorice, a 1902 product called Stainligo Stain remover, figurines, books/stories, and household utility items such as a pencil holder. Moving on, as Franklin Hughes mentions in “Alligator Bait Revisited”, there are some people who do not accept the concept of children being used as alligator bait. “[S]ome people want to set a morality level that they believe others, cannot cross, like the alligator bait concept.” Hughes continues that something does not have to be a widespread practice in order for it to have occasionally occurred. The “Journal of Threatened Taxa” (Vol 7, No 1), by Anslem de Silva & Ruchira Somaweera, lists a variety of American-newspapers that prove the existence of the use of human babies as alligator bait. Such newspapers include: a 1908 report in the Washington Times that a keeper at the New York Zoological Garden baited ‘Alligators with Pickaninnies’, an article in the Oakland Tribune (on 21 September 1923) that reads “Pickaninny bait lures voracious gator to death’, and an article that the Los Angeles Times ran (in July 1968) about the baseball player Bob Gibson in which he mentions an inhabitant of Georgia stating that ‘Negro-youngsters’ were used in baiting alligators (Chapin 1968).

Description of the Collection

The African American Stereotype Postcard is NO. 69 in the Alligator Bait series. The original production date is unknown, however, based on the postmark it was produced around 1918 c. There are four, naked children on the postcards with names, in white, on their bodies. They are sitting in a grassland area by a body of water. In the bottom right-hand corner you see the series number and name — 69. Alligator Bait. On the back of the card there is a letter addressed to someone in Westbrook, Maine. “Hello [name], Here is some bait for you to go fishing with in the [Beaver] Pond. There use to be lots of little black [bass] there. I wish you good luck. They ought to bite pretty good in the spring of the open…”. Also written on the back, and in the middle, of the African American Stereotype Postcard are the words C. T American Art with Curt Teich Co.’s publishing symbol. The postcard’s overall condition: slight tear, two stamps, and one postmark (Content: APR 5 7pm 1918. SPARTANBURG, S.C. WADSWORTH BR.).